Why Nearshoring to Canada Is on the Rise

Outsourcing software development has become a strategic initiative for almost all companies. This strategy is to leverage the advantage of cost, skill sets, and time zone advantages.

Companies gain a lot by outsourcing as many tasks as possible. However, there were limitations when outsourced the way outsourcing has happened so far.

The traditional way of outsourcing was in outsourcing low-level tasks and keeping the strategic development in-house. The strategic tasks could not be outsourced due to multiple obstacles such as the difference in time zones, language, and the lack of a communication infrastructure, etc to name a few.

To elaborate, outsourcing to countries had its own share of advantages. However, there were disadvantages as well. The time zones were different and the onsite-offshore teams were not able to interact with each other that often. Constant interaction was needed to develop products, design products, ideate on the product roadmap, etc to name a few. Hence, it was difficult to involve the offshore teams in such discussions. Hence the organizations had to limit their talent acquisition to the home country. The cost of onsite teams was too high and hence not many companies had a big budget to involve a larger team to supplement their strategic teams.

Even if people were willing to stay the extra hours to communicate, it was a big problem. Internet connectivity is not all that great in many countries. The calls had a lot of static noise and people were struggling to make sense out of each other’s seemingly unintelligible words.

Even if the internet connectivity was good, the next barrier was language. Not all the people in the offshore company were good speakers of English. Hence it was very difficult for the organizations to convey a thought and get the work done.

Canada as a destination began in a small way and has become an important factor for organizations when they explore an offshore location. Let us look at some reasons as to why American organizations are choosing Canada.

US and Canada share the same time zones as they are located next to each other. The time zone overlap makes it easier for companies to participate in cross-border collaboration and video conferencing.

Having a software developer working for you at the same time will make it easier for your entire team to collaborate during working hours. This approach also helps make the software development cycle more predictable. The problem of quickly connecting and ideating on multiple ideas will be solved.

In many situations, it is easier for Canadian citizens to just hop on the flights and do weekly meetings with the customers in the United States. There will be no restriction on visas. The proximity will also ensure that the number of face-to-face meetings will be very frequent. The constant meetings will make the projects get executed seamlessly.

Canada's official languages ​​are English and French. Over 80% of Canadians speak English. Americans are comfortable if with English. The accent is also similar between the people in the US and in Canada. Half the battle is won if the communication between the two teams happens seamlessly.

The outsourcing model itself is designed to help companies cut costs. While it's no longer the main engine for offshoring or approach, it still weighs a lot.

If American companies commissioned project development in Canada, they would enjoy a very favorable exchange rate. Because the Canadian dollar trades less than the US, development costs can be significantly lower. The dollar fluctuation means that you can do more with less money in Canada than you would do in the US.

4. Talents are Wide and Varied

Canada has a highly skilled, and experienced workforce. A large number of leading educational institutes are churning people with computer skills. Canada is also home to many people who prefer to work in and around the United States but prefer a calmer lifestyle. Therefore, whenever you outsource software development to your northern neighbors, you can count on its unmatched quality. Canada has substantial back-end developers, front-end developers, full-stack developers, and web developers. So you will be able to outsource projects in any tech stack.

5. Equality in Law and Political Stability

The biggest problem in outsourcing is the protection of Intellectual Properties. Organizations innovate in their business model and hand over the knowledge to the service provider. They are constantly worried that their trade secrets could land in the hands of their competitors. The laws in many countries are not favorable to protect the IP. However, both Canada and the United States share more than just language and culture. Local and national laws also have a lot in common. The similarity in-laws make it easier to protect trade secrets. People in Canada also understand the legal implications of IP violations. Political stability makes it easy to outsource long-term projects to another country. The law will also help ensure that projects are executed on time and within budget.

Since the Trump administration redesigned the H1-B work visa program, Canada has quickly become an alternative to foreign-born technology talent. Tech companies in the region have long relied on foreign labor to advance the industry, and strong government support will only make it better.

The United States is always looking for external technical help to build great products and applications. Canada continues to attract them to add to its already growing local talent pool. So if it's hard to find top tech talent, it might be good to look north of the border.

With all of its benefits, it's no wonder Canada continues to be a popular coastline outsourcing destination. However, regardless of whether you choose to go offshore or nearshore, it is essential to work with an outsourcing provider who is agile and willing to develop a program that is specifically tailored to your unique business goals and budget. Organizations get best of the both worlds – Proximity and also Cost savings.

Benefits of Outsourcing Your MVP Development Should You Choose AWS or Azure For Your Next MVP Development Project? 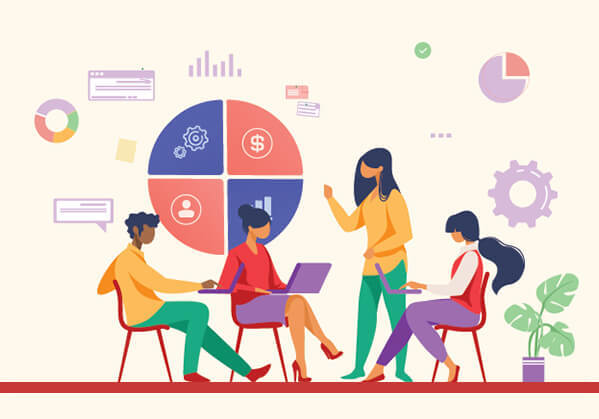